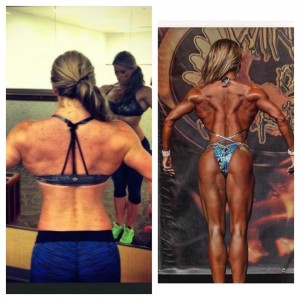 Are you in a building phase? Thinking about doing one?

I wanted to share a back photo from when I was in my building phase, I think I was about halfway through (pic on the left) a 16-17 month build here. That’s right…MONTHS. Not weeks. The pic on the right is from my show in Chicago last month.

Was it a struggle at times? Sure. I felt fluffy, my clothes were tight, I lived in leggings. But in the words of Frank Lloyd Wright, “You have to go whole heartedly into anything…in order to achieve anything worth having”. So I did.

I remember looking at that picture on the left after it was taken and thinking “my back is WIDE!! YES! I’m building muscle…but I have a chunk around my waist lol. Oh well”!!

Although a little self conscious at times, obviously I know it’s unrealistic to expect to stay ripped up AND build muscle at the same time.

Since I started competing in 2011, I have done a few building phases, but never before did I commit to an extended period of time to grow – nothing that yielded results that I was totally happy with. In my early years as a competitor, before I knew better, as soon as I hit that moment when I was uncomfortable in my clothes, I felt anxious and wanted to get lean again so I immediately started dieting. I never looked much different honestly – the building periods were too short.

After I turned Pro in 2013, I knew that I wanted to build a lot of muscle. I didn’t want to step on a Pro stage without being able to “hold my own” up there. I refused to short change myself just because I felt a little self conscious and was gaining some weight. Trust me, because I did it the wrong way before, when you lean back down and see that you look and weight the same, you WILL REGRET not spending more time growing.

I will not ever deny that watching the changes in your body (gaining weight) is just tough sometimes – male or female, it is tough. I don’t care who you are, at times, the extra weight and change in your body (especially if you’re coming out of a show where you were really lean) is difficult to watch.

So I’m telling you now, IF that is ALL you’re focused on, you WILL be miserable, you’ll likely make those around you miserable, and you’ll probably end up cutting your building phases too short – soooo, try redirecting your thoughts and change your mindset.

Here’s how I coped and got through those days when I just felt yucky: I focused on the amazing process that my body was going through…I was building something! I thought about the strength that I was gaining, and the empowerment that came along with it – it is such a proud feeling for me. I focused on how confident I looked and felt.

I focused on my end goal and what the result would be. While that sometimes that took daily reminders from myself, I never lost faith. I actually wanted to hit 170 lbs before Erik started my dieting phase lol and was disappointed that I only got to 165/167. Haha. I never thought that would be my “goal” but it was! I was THAT CONFIDENT in what I was doing.